In their excellent chapter on the use of digital data in historical research, Frederick W. Gibbs and Trevor J. Owens distinguish between two DH approaches to data. ‘Data’, they argue, ‘does not always have to be used as evidence. It can also help with discovering and framing research questions’. On the one hand, you have ‘complex statistical methods’ and ‘rigorous mathematics’ (or ‘mathematical rigor’) to ‘support epistemological claims’. Gibbs and Owens equal this type of DH research to the wave of quantitative history in the 1960s and 1970s, using data ‘for quantifying, computing and creating knowledge’.

On the other, there is a ‘fundamentally different’ form of using data – a form that is exploratory instead of analytic and deliberately without the mathematical complexity that is needed to derive evidence from quantitative analyses. Above all, it’s a form of data manipulation that can be playful (although the authors removed the adjective at one of the places it appeared in their text). Gibbs and Owens state that ‘playing with data – in all its formats and forms – is more important than ever.
END_OF_DOCUMENT_TOKEN_TO_BE_REPLACED 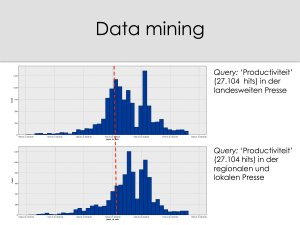 Last week, I gave a talk at the Europeana Newspapers Information Day at the Staatsbibliothek Berlin on the use of digitised historical newspapers in our Translantis project. I gave an impression of the tools and functionalities we are experimenting with and the challenges – in terms of source criticism and interpretation – that come along with this fairly new type of historical research.

These are exciting times for historians. Both the quantity of historical source material getting digitized in an ever-growing pace, as the development of tools and techniques for grasping this data will have an irreversible impact on the way historical research is done. All the more essential is the realization that digital methods are there to assist and not to replace the historian. They can never make up for the need for the ‘old-fashioned’ historical analysis and narrative.

END_OF_DOCUMENT_TOKEN_TO_BE_REPLACED

This blog post is the adapted conclusion from the paper ‘A Digital Humanities Approach to the History of Science.
Eugenics revisited in hidden debates by means of semantic text mining’ I wrote in collaboration with Fons Laan, Maarten de Rijke and Toine Pieters. The article was based on the research I did within the historical text mining project BILAND, as well as its predecessor WAHSP. The article is in press as part of the Proceedings of the 1st International Workshop on Histoinformatics.

In a recent blog post called ‘The Deceptions of Data’, Andrew Prescott has criticized the jubilation of the ‘digital revolution’. He states that “One of the problems confronting data enthusiasts in the humanities is that we feel a need to convince our more old fashioned colleagues about what can be done. But our role as advocates of digitized data shouldn’t mean that we lose our critical sense as scholars. [. . . ] [T]here is a risk that we look more carefully at the technical components of the datasets than the historical context of the information that they represent.” END_OF_DOCUMENT_TOKEN_TO_BE_REPLACED